Our good friend JoAnn Loctov of Dream of Venice fame is hosting a photography submissions contest of sorts, one I have no illusions about standing any chance in…but submit some black and whites I must.  It was impossible choosing which of my favorites to submit, but I tried to capture the feel of Venice’s buildings and timelessness without doing the generic shots of San Giorgio Maggiore and the Rialto and San Marco that a million other folks have shot.

Photos I didn’t end up submitting but that I like:

The older fellow by the boat is none other than Doug Sassi himself, taking in the sunset on Burano and watching the boats go by.  It’s a sentimental shot and you can recognize the Buranese buildings if you look closely, but it didn’t scream “Dreaming of Venice” to me, so I left it out. The clouds and sunset as the boat goes by is more typically Venetian, but the 35mm lens I had at the time leaves the Venice skyline too distant to really drive the point home.  The 50mm prime I traded it for would have been better.

Burano’s acqua alta shot was one of my favorites, but I found the people in the shot distracting and selected a less populated version of that shot on Murano that has a similar feel to send in.

If by some chance one of my shots is included, it’ll be a high honor to say the least.  In the meantime, I think I’m liking this B&W thing.  Look for more playing around with it in the future!

A lovely evening walking around Venice’s back alleys with our friends at Venezia Autentic.

One of our favorite meals in the world is the grilled branzino, filleted table side by our good friend Massimo, and served in the incomparable Trattoria da Romano’s outside seating.  A little drizzle of olive oil, a squirt of fresh lemon, and the only restaurant in Venice allowed to cook over an open flame shows you why it’s worth traveling around the world for. 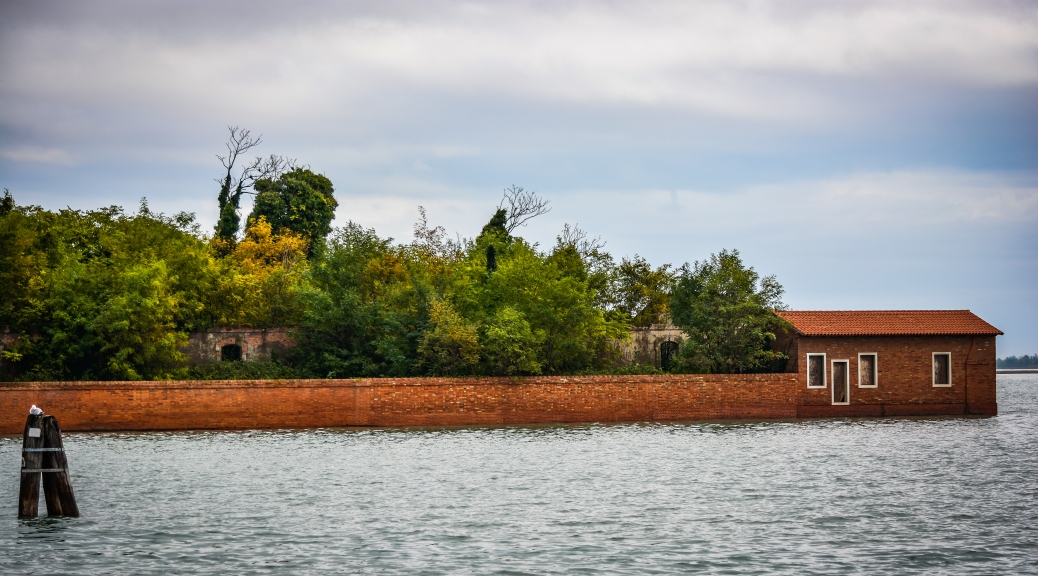 Abandoned for many years now, I wonder if maybe il Sindaco Brugnaro will let me buy it and fix it up.  Sassi Italy Tours World HQ in the lagoon?  Why not! Shot this a little while ago from Burano.  You can see when you zoom in the smoke stack spewing bunker fuel fumes into the air; you can see the gigantic scale on the cruise ship compared to the Venetian skyline.   It’s a monstrous floating city that dwarves the delicate city next to it.

It’s plain as day why the cruise ships need to be docked away from Venice.  Click for a full size image that really drives the point home.

When in Venice, one of the tricks to getting the “real deal” cuisine is getting away from the touristy areas and eating as the locals do.   Which means skip the shady pizza joints and “menu turistico” places with hawkers begging you to look at the menu as soon as you get off the boat, and dig into the city to find out where the locals are noshing.

You’ll find some amazing treats at bacaro type establishments pouring spritzes and serving up cicchetti that are just to die for.  We’ll show you where!  Make sure you click to enlarge.

The art is definitely found in the glass, but not only in the glass.  Walking around an Italian wine producing house,  you’re struck by how ubiquitous, how ever-present the beauty can be.  Even something as simple as the results of a de-stemming process can captivate.

One of the things I love about winemaking: there's art to be found everywhere, not just in the glass, but also the process. @Giribaldi_ pic.twitter.com/lZfg8xxXLw

“The charm of certain vacant grassy spaces, in Italy, overfrowned by masses of brickwork that are honeycombed by the suns of centuries, is something that I hereby renounce once for all the attempt to express; but you may be sure that whenever I mention such a spot enchantment lurks in it.” —Henry James

We’ll not renounce it, yet know any and all such efforts inevitably will fall short of what Hank could come up with.

Interesting Venice related political rant makes the NYT Op-Ed section.  Good read on the need for sustainable tourism and how Italy’s local graft and incoherent national approach to politics isn’t helping Venice.  Our comment was submitted to the NYT, we’ll see if they publish it.

“No effective provision on Venice’s behalf has been enforced so far by the Ministry of Cultural Heritage, although protection of environment and cultural heritage is among the fundamental principles of the Italian Constitution.”

This is the maddening bit, right here–the Italians know what treasures they have, but their internal bureaucracy and graft prevent meaningful responses to crises like this. Local authorities being at odds with Rome over preservation is an understatement, as il Sindaco, the mayor of Venice, Luigi Brugnaro is unabashedly and unashamedly in cahoots with the cruise ship biz, and makes no secret of his favoritism toward destructive tourism. Venice needs visitors, but it needs responsible, sustainable tourism, which is the only kind we’ll engage in. Please, visit Venice, but do it in the off season, don’t take a cruise ship but instead arrive by train or water taxi from VCE just across the lagoon, and stay in locally owned boutique hotels, and eat in family run restaurants away from the tourist traps close to San Marco that cater to the cruise ship crowds. Please, to help preserve Venice for future generations.