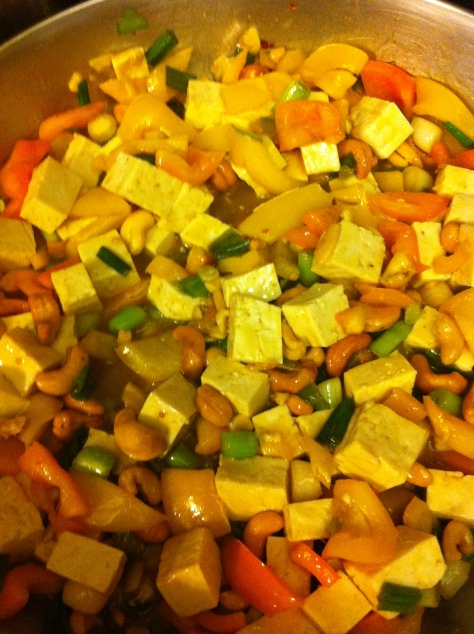 We don’t eat Italian cuisine every night around these parts; a little yellow and orange and green onion stir fry with tofu and cashew for protein with a local artisanal food shop’s spicy glaze and some soy aminos. Yum!

One of things you’ll invariably notice as you travel in Italy is how fresh everything tastes. While you can’t always feasibly duplicate the ingredients list you’ll enjoy in Italy (my meager kingdom for those anchovies and sardines you can get in Venice), you can still get the essence of the Italian palate on your dinner table with the proper sourcing and use of fresh sage, nettles, basil, onions, peppers, tomatoes, artisanal cheeses, etc found at your local farmers’ market or organic grower. One thing I’ve learned–the aromatic ones like basil really profit from freshness and being added to the dish as late as possible. If you toss chopped basil into your sauce while it’s still cooking, the kitchen will smell great, but that great smell is the essential oils being boiled off and leaving little of their joyful flavor in the dish.

Here Sawyer helps daddy by pulling the wagon as I thought about how many types of basil I could get to grow in the back yard. She didn’t seem super enthusiastic about my request to keep moving down the aisle. What’s the hurry daddy?

Not a typically Italian preparation given my ingredients list but I’ll share it here anyway as it’s ridiculously tasty.

Olive oil, a pat of butter, and minced garlic in a stainless skillet. Warm it up and toss in the ahi tuna fillets and warm them up. Sprinkle of salt, ground black pepper, and a splash of teriyaki. Wet the butter and oil with a few ounces of sherry. Flip the tuna to cook evenly and add a few capers and a pinch of red curry paste for some spice. When it’s ready to serve toss in the spinach and wilt it, and serve.

When you have a two and a one year old, having a dish that you know finicky eaters will chow down on is key. And it’s pretty rare that my little ones turn their noses up at risotto.

I start with garlic in olive oil and butter with some diced shallot. After the arborio is warmed up and glistening, I cook in a shot of sherry, some porcini mushrooms, and this time I also added some roasted squash. Lots of broth, a fistful of romano once it’s cooked, and half an hour of stirring later, I have a simple but incredibly savory dish that the kids can’t get enough of.

Nothing cuter than a 1 year old with risotto all over his face grinning :).

As good as this is, one of the perks of Doug Sassi’s tours is finding a lot of risotto that blows mine out of the water. Much to learn I still have.